ummm...I mean Fiber Junkies.
I've talked about my fiber buddies before.
We got together this past Monday at Mary Stori's
beautiful mountain top home near Waynesville NC.
What an awesome view from almost every single window!
We had our First Annual Planning Meeting...sounds all formal and important, doesn't it?
Well, it IS important to us...
but believe you me, it was no where near "formal"!
We did have our regular "show and tell" - which is always so fun and inspiring.
Fellow Fiber Junkie (they will always be Fiber Freaks in my mind - my husband calls them that...) Patsy Thompson was showing us a small quilt that she was working with feathers on.
I would have never imagined this color combination but it looked really good!
I don't know if you can see how perfect her stitches are but they look great...no stitch regulator for this girl! 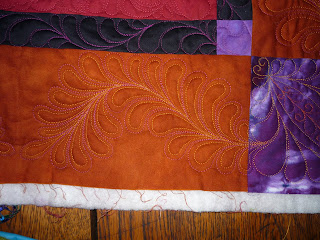 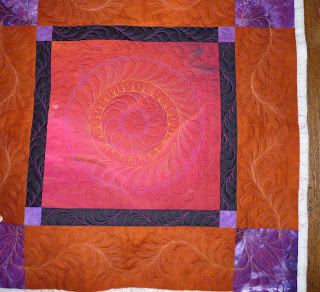 My favorite part was the corner motif...looks like one of my crazy flower sketches. 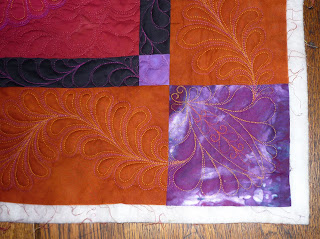 Patsy made us all these really cool pin cushions for Christmas gifts. I love how she is breaking out with using her heat gun to burn through layers.
You go girl! 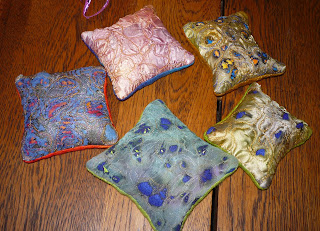 And, as usual, Mary Stori has wowed us all with her beading. 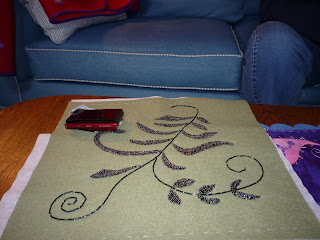 And Val McGaughey blew us out of the water with this piece of art work.

It has layers and layers of screen printing, resists and applications of paint.

I can't wait to learn how to do this! 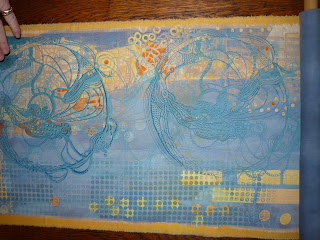 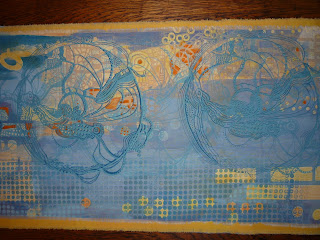 My friend Judy Simmons is making her daughter's wedding gown

and pulled out the beads that she is trying to pick from.

I love the way that the light hits on the side of the beads. Just beautiful. 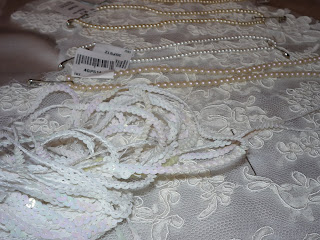 And the lace. That lace is about 18 inches wide (I think).

I meant No Pressure!

Judy will do fine...

as long as we keep the gold and purple fabric away from her.

Perhaps you can read that story on her blog. 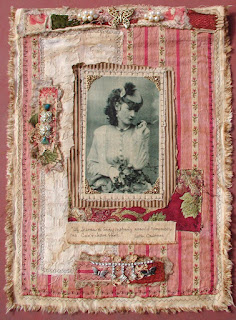 I hear a lot of fellow artists mention that they would like to sell their art...
sell more art...
or market themselves as artists
but just aren't sure what to do
or how to go about doing that.
Enter KC Willis.
Artist extraordinaire, wild west woman artist
that is here to take your hand and lead you through
each and every little step that you need to take.
She has several classes over at her site
but the one that I am pointing to right now is the
"Marketing Mindset" one.
She has been there, done that and is continuing to
Do That as we speak (or write and read) (...).
Since times, they are so difficult right now -
she is running a special price - but you gotta hurry!
That price will go up soon...
Run on over to Miss KC's and get your Marketing Mindset on.
Posted by Carol Sloan at 10:17 AM 3 comments:

I belong to an online group of Fantastic Artists who call themselves The Altered Art Divas.
They host a lot of different swaps as someone is always up for swapping a little art...
right?
I signed up for a couple of banner swaps this year.
The first one is "Shades of White".
A Winter Wonderland Swap.
We were to use a white background with a touch of blue.
I played around with a couple of ideas and finally settled on one.
I drew one of my journal page images (the tree) onto a canvas background.
I used Derwent watercolor pencils to add just a touch of color. In order to keep the Winter Wonderland look, I added a lot of water to wash most of the color out.
Except the touch of blue.
My touch of blue is two little blue birds perched in the tree.
They are funky little birds with wonky beaks.
I used my trusty Bernina to thread sketch all the images. Like I said earlier, I drew the picture on the fabric first. I used a regular HB sketch pencil.
And tried to stay on the lines...but I do tend to not only color outside the lines but sew outside the lines too...
Diva's - don't look too closely! 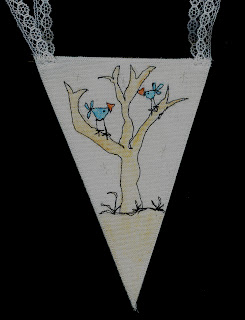 I had used canvas as my background and it was kinds flimsy.
So I added a layer of some old Heat & Bond (I usually use Mistyfuse for all my fusible but I have several packages of Heat & Bond around...trying to use what I have here at home) and then placed a light colored fabric as the backing.
I used a zig zag stitch around the edges.
And man, did my production sewing skills come in handy at this part! I zipped those babies up in
No Time! 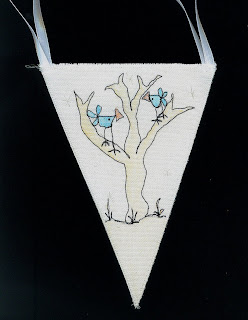 I used lace as ties for some of the banners and ribbon on the rest of them.

I also added a few silver snowflakes with some of the shiny thread that my son gave me for Christmas.

It IS a Winter Wonderland Art Banner you know...

I'm sending mine out tomorrow. They are due to Debi's house on February 1 so I am actually EARLY...

can you believe that!?

Now I can start on the "Bird Banners" - which are the next swap I am signed up for.

So that means I have been ahead of schedule all year long.

Hope your year is going well.

I forgot to adopt A Word (you know, The defining Word of the Year) this year.

Maybe I'll think about that today... 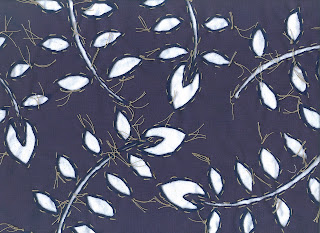 OK - I beg forgiveness for not posting more.
Between the holidays, wheezing, doctor appointments, running to the drug store, close family birthdays and (of course) art projects - I've been pretty darn busy.
Just like everyone else...
I have posted before about a little book love that I have...
did you know that she is coming out with a totally NEW BOOK!?
(check it out)
(pre-order it)
(I did)
I have made a sketchbook cover and an awesome skirt
from the book patterns.
Being the independent type artist that I am,
I had to branch out and begin to make my own stencils
and patterns.
The above photo is a scan of a hand drawn stencil that I made.
I am making another sketchbook cover for me - the orange one that I made just isn't my favorite color.
But blue IS! I'll add some beads so my buddy Mary Stori will still love me (waving - Hey Mary!).
I am also working on a fingerless glove pattern too.
Won't that be So cool?!

I've been a bit under the weather here lately but hope that
a visit to the specialist next month will prove fruitful.
This weekend my husband had a conference in Atlanta (Georgia) for college umpires.
Being a good wife, I went with him - and met a friend from NC there (waving -Hey Crystal!)
and her daughter (waving - Hey Brittany!) for a few hours of fun, laughing and shopping in Atlanta and Marietta. We had a blast!
So - isn't this odd - I am from SC.
Crystal is from NC.
We met in GA to visit...
Odd but fun. And convenient.
So - I'm home now. Glad to be here.
And almost finished with 20 Art Banners for a winter themed swap
that I signed up for a while back.
I'll try to remember to post some photo's tomorrow...
I hope that you all are enjoying your New Year.
Posted by Carol Sloan at 11:35 PM 1 comment:

Last week I had the most fun!
I helped Susan Sorrell teach art classes for Charter High School students.
They do not have a regular art program at the school,
so once a year local artists teach them a variety of really cool classes.
They really had a lot of choices in what class to take -
including belly dancing, wire work, stained glass and rock carving to name a few.
Susan and I taught them about hand embroidery, painting fabric, beading and doodle drawing.
They were all great kids -very polite and well mannered, as well as entertaining and funny.
I think I will teach a couple of classes next year.
That's one thing that we, as artists, as adults, need to do.
To share our knowledge with the next generation.
We have to keep our craft, our art alive by sharing it.
Posted by Carol Sloan at 11:30 AM 1 comment:

I hope that everyone is having a great New Year (so far)!
I am! This year is going to be AWESOME!
I can just feel it in my bones...
I sense the excitement - the sheer magnitude of what will happen this year could be overwhelming
but I'm not letting it.
I am greeting it with open arms...
Open.
Arms.
Today I handed over the samples for a workshop that I am teaching locally.
I'll post more on that later but for now, let's talk about UFOs.
Huh?!
Aliens?
No, silly!
UnFinished Objects...
I have posted before about the book "Alabama Stitch Book".
Love. It.
Totally.
When I first checked out the book from the library, I started a sample piece, just to see if I could do it...if I wanted to commit to a larger project.
I was going to make a book cover.
Small, quick and easy.
Not.
I mean it was (small, quick and easy) but I wanted to Get On With It (the Skirt, that is).
I got right to The End of it and sat it aside in my excitement to make a skirt.
And forgot about it.
Fast forward to last week. I was working on putting things away in my studio and came across it again.
Bingo...
Had to finish it.
Had to.
So, I pulled out all the necessary items and got to work.
I had already done most of the work.
Even did the beading.
All I had to do was sew the flaps together, fashion a tie and put my sketchbook in it.
Viola! 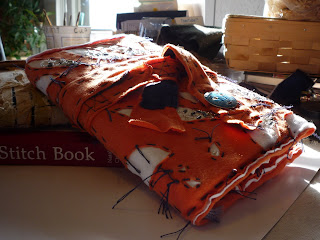 Can you see that cool button? It's so Cool!
It has a face painted on it. 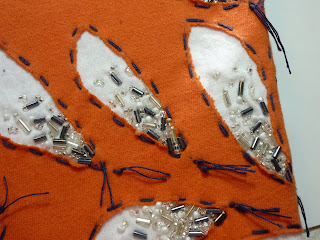 Look at the beading...how cool is that? 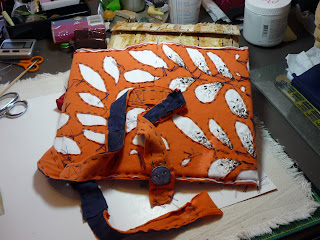 I used two tee shirts to make it.

This is Green Sewing at its finest.

I even used the arm seams for the wrap! 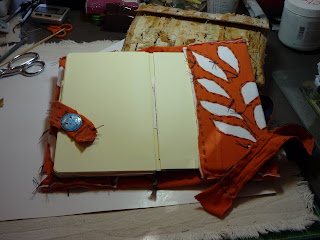 My Moleskien loves its new home.
Everyone that sees it loves it.
I'm making another one - this one will be my own stencil design.
And I'm going to use blue and white tee shirts.
And khaki colored thread.
Maybe.
But definitely my own drawing for the stencil.
And I'll find another really cool button for the next one too!
Posted by Carol Sloan at 4:37 PM 3 comments:

Carol Sloan
SC, United States
Creating art is like breathing to me. Everywhere I go, everything I do, everything I see becomes fodder for my artwork. It's just the way that I see, the way that I look at life. In photos of me as a young child, I was always clutching a crumpled paper bag. Those bags were chock full of treasures- feathers, rocks, leaves and all sorts of ephemera. As an adult, I do the same thing. I am a collector of things, nature lover and creator of odd little works of art. I draw. I paint. I love textiles and layers of texture. I'd love for you to follow, join or play along with me as I trip trap through this thing called life. If I'm not elbow deep in paint or fiber, I'll be knee deep in water, kayaking with my husband.

Interested in hosting a workshop or class with me? Just email with questions and requests to carolbsloan@yahoo.com 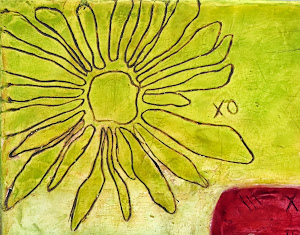 You can use the screens in a variety of ways!

All art, writings, and content of this blog belong solely to Carol Sloan. Please do not reprint, publish or borrow without the express written consent of the author. It's just not good for you...

Navigation For Creative Learning and Living

Look For My Artwork!

Join Me in The Sketchbook Challenge!